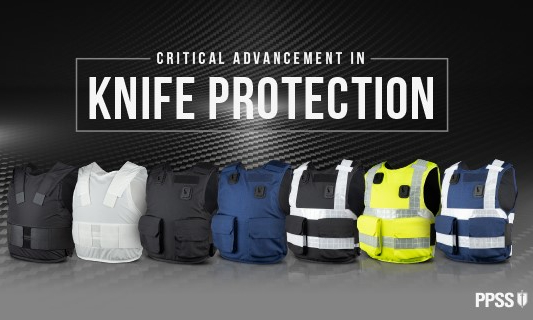 Based on a comprehensive understanding of today’s most realistic threats faced by homeland and private security professionals, PPSS Group have today announced an official replacement for their highly acclaimed polycarbonate-based stab resistant body armour.

The firm’s product video, featuring the CEO Robert Kaiser being beaten and stabbed wearing the body armour is widely regarded as ‘physical evidence’ of its precise performance level and quality.

Kaiser said: “Following years of relentless R&D we have concluded that Polycarbonate as a raw material is, or at some point will no longer be good enough. Its lack of certified spike protection resulted in it becoming ‘morally’ very difficult for us. We learned to accept that improved protection from knives, machetes, razor blades, shanks and indeed spikes was needed.”

“We concluded that carbon fibre composites are the only real reliable and forward-thinking solution. Carbon fibre is enabling us to offer truly superior levels of stab protection alongside substantial weight reduction, lower thickness, and finally also fully certified spike protection. This at no extra cost”

According to their CEO, certified spike protection is crucial, especially to correctional and prison officers who face some of the cruellest makeshift weapons, such as shanks and spikes daily.

Spike protection has now also become of equal importance to private security professionals, simply due to the type of weapons appearing on the streets in recent years.

Over the past ten years, PPSS Group’s body armour have been offering the most reliable levels of protection from edged, protecting security professionals and law enforcement, prison, immigration, and customs officers worldwide.